Advice For Those Who Believe They Give Great Advice - Achieve Performance

Advice For Those Who Believe They Give Great Advice

What to Look For when Hiring

Passion For Work Is More Important Than Engagement 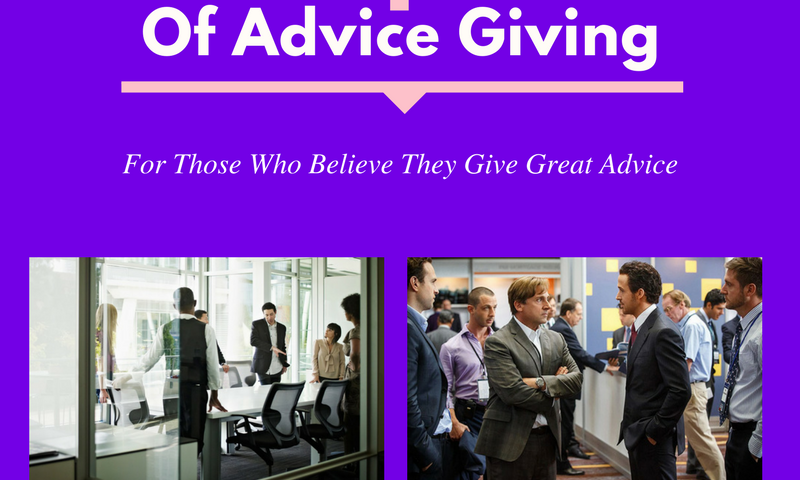 Advice For Those Who Believe They Give Great Advice

2. Less interest in receiving feedback from others or willingness to change. Those with a strong preference for giving advice were rated much lower on actively looking for feedback and willingness to change based on feedback from others. People felt the leaders who allowed discovery were significantly more willing to create an atmosphere of continual development and improvement.

3. Less effective at developing others, coaching and giving feedback. The motive for many people who give advice is to help others develop, but their significantly lower ratings are a tell-tale sign this it’s clearly not the way the message is getting received. Just as those who prepare to teach a class learn more than their students, strong leaders who develop others spend a great deal of time listening and supporting others in their personal discovery as opposed to telling them what to do.

4. Discourage new ideas and approaches. In our research, we found that leaders with a stronger preference for giving advice were rated significantly lower on encouraging others to consider new options and tended to get stuck in a “one right way” approach. Rather than improving on the ideas of others, they discouraged them. In a nutshell, those who gave advice were much more interested in their own ideas than those of others.

5. Less effective at inspiring and motivating. Some people have imagined that once they give others their advice, the recipients will be inspired and motivated because their advice is so amazing. In reality, when someone gives advice, others are only passively or politely interested. Most inspired ideas come from discussions, not lectures. In order to inspire others, we need to understand their concerns, frustrations and passions. This understanding comes from leaders who listen much more than they talk.

6. Less effective at communicating. Even though advice givers frequently had much more to say, they were rated significantly lower at helping others to understand, and also received lower scores on their ability to communicate insights. This is a result of their lack of understanding the perspectives, needs and concerns of others. Those with a strong preference for giving advice are communicating from their own perspective, the study revealed, and have little concern for the perspective of others.