How to Do Truly Great Work in Your Organization 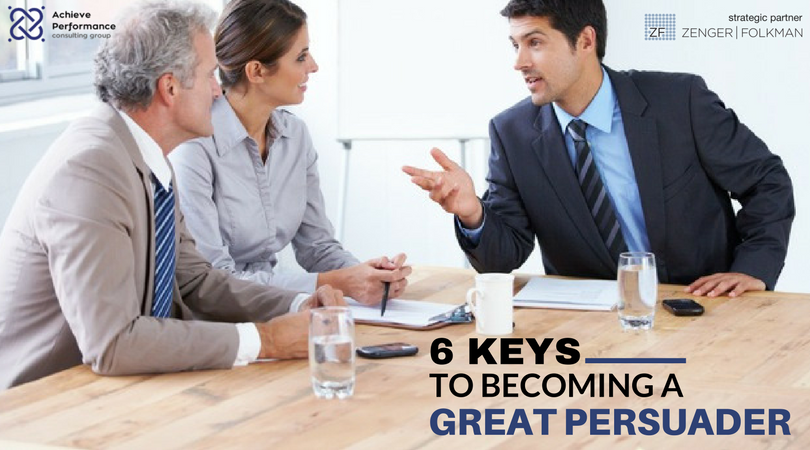 Most of us have been in a situation where we need to persuade others to accept our position or approach. When this happens to me, I will often ruminate in my mind how the conversation might go. I imagine that my colleague will state their position, to which I will respond with such great power and amazing insight that every observer will be persuaded to my position. However, when the time comes to persuade others to my point of view, I typically find that it’s much more difficult than anticipated.

I was recently asked to coach a CEO on his presentation skills in delivering a very critical proposal to a high-ranking official. While I had a lot of ideas and opinions on skills that are important, to provide the best guidance I turned to our research to determine what the most persuasive leaders do.

In one of Zenger Folkman’s assessments, we measure how effective leaders are at clearly communicating and persuading others to their position. Using a dataset of 330 senior leaders in an organization, I looked at which behaviors enabled leaders to be more persuasive. After identifying the top 20 individual behaviors I then used a factor analysis to find the top six dimensions, which reveal that the most persuasive leaders exemplify the following behaviors:

My immediate inclination to persuade others to accept my position is to talk, talk, talk. However, taking the time to listen first is a much more effective strategy. The best persuaders want to understand the opinions and concerns of others before presenting their point of view. Those who try to persuade first often bring out the disagreement from others, causing a debate to occur and people to start choosing sides. Once people are entrenched in their position, persuading them to change is almost impossible. By listening first, leaders understand the disagreements and concerns of others. This gives them the opportunity to either modify their proposal or at least empathize with the concerns of others.

Often leaders who try hard to persuade others to their position create competition between groups or individuals. Rather than looking for an integrated solution, they often create a distinctive solution that only fits the needs of one group. Those who are most effective at persuading others look for ways to cooperate; they create the bigger tent and make sure that it covers everyone. One of the greatest advantages of any organization is its ability to get groups and individuals to work together. The synergy created by collaboration can create significant value for the organization. Leaders who have a strong motive to increase collaborative efforts in the organization are far more persuasive. The lone wolves that set themselves up to win at the expense of everyone else have a difficult time getting support for their proposals.

It’s very easy for those trying to persuade others to get tactical early in the persuasion process. This is a mistake! People need to first understand the why before they agree to the how. Taking the time to link a persuasive idea to the strategy and vision of an organization helps everyone understand the big picture along with the pros, cons, and tradeoffs. People are willing to endure a few cons and tradeoffs if they see how this new idea or process helps the organization achieve its strategic objectives.

Looking at 360-degree assessment data from over 70,000 leaders, we discovered the 76% of leaders were rated higher on their ability to push (drive for results) than their ability to pull (inspire and motivate others). When most people think about how to persuade others their knee jerk reaction is to push harder (e.g., “tell them what to do and give orders”). Pushing results in compliance but often sacrifices commitment. Leaders who are effective at inspiring are able to achieve both commitment and compliance, create excitement and energy in others, and are successful at enlisting others in a mission or cause. People take action and make changes because they want to, rather than they have to.