It’s All About Me! What Happens When A Leader Takes All The Credit? 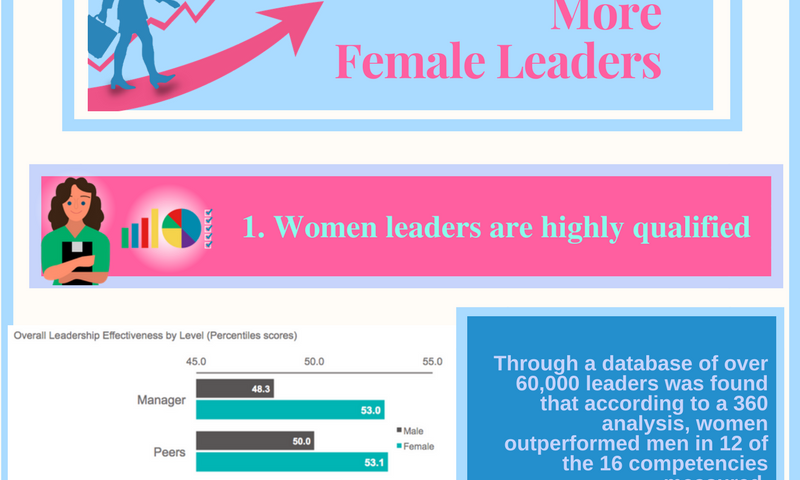 In the U.S., since 1970, 26% of the growth in GDP has been directly attributable to having more women in the workforce. Hiring women has clearly been beneficial, but the benefits don’t stop with a mere headcount. Companies are in need of strong individuals in key leadership positions. Women are a huge and largely untapped resource that is often not recognized. Vik Malhotra, a senior partner at McKinsey and Co., has said, “For women, the corporate talent pipeline is leaky and blocked.”

The graph below echoes this sentiment that even though women make up more than half of the workforce they are surprisingly sparse at the top.

A few years ago I shared a study on Harvard Business Review in response to the question “are women better leaders than men?” My colleague Joe Folkman and I looked through our database of over 60,000 leaders and found that according to our 360 analysis, women outperformed men in 12 of the 16 competencies we measured.

This realization was very intriguing and we have spent a good deal of time trying to learn more about women in leadership and how they can better leverage their unique strengths.

Our 360-assessment takes reports from managers, direct reports, peers, and others. It turns out women had the most positive ratings from Managers. In the graph below you can see the difference between men and women in all the rater levels.

2. Women are more likely to seek out opportunities to learn and improve throughout their career.

We looked at men’s and women’s scores on self-development in our assessment and found that early on in their careers there is no significant difference between their scores. However, you can see in the graph below that as their careers progress, females did not decline like males did over time.

Our data showed that increased effectiveness occurred because most women chose to continue to learn and develop. The point is not about males versus females, but rather the power of development and continuous improvement.

A study done at MTI showed that teams with mixed gender are more productive and creative. In fact, the economists found that simply moving from an all-male or all-female office to one that was evenly split could possibly increase revenue by 41 percent. How? Their research found that “greater social diversity implies a greater spread of experience, which could add to the collective knowledge of a group of office workers and make the unit perform more effectively.”

Again, my point is not to say that one gender is better than the other. Rather, both are effective and with the rising shortage of senior leaders, both are needed. For example, Kevin Kelly, a CEO of Heidrick and Struggles, found that “40% of executives hired at the senior level are pushed out, fail or quit within 18 months.” Organizations can greatly benefit from putting more emphasis on identifying women in their ranks, and working to develop them for senior roles they can succeed in.

In all, our findings should be clear: Companies need the diversity and benefits women leaders provide. Every company can benefit from placing much greater emphasis on getting more women in its leadership ranks.