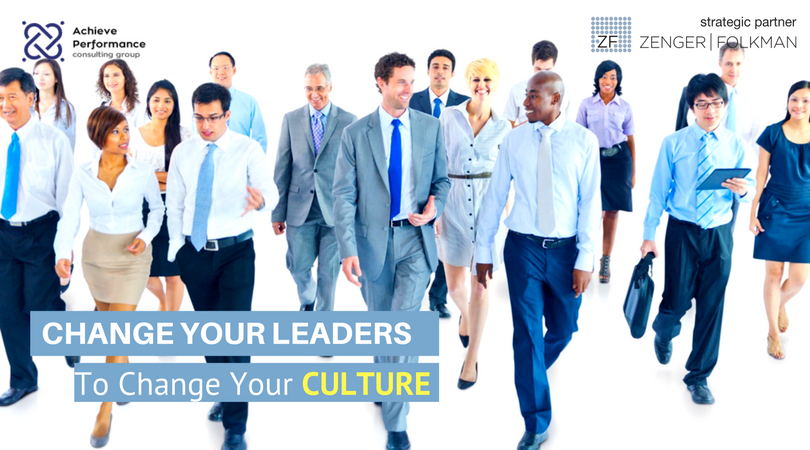 To Change Your Culture

How would you describe the culture of your organization? Some might say, “It’s the smell of the place,” or, “It’s how things are done around here.” Research done on culture and organizational performance by Kotter and Heskett define culture as “…gained knowledge, explanations, values, beliefs, communication and behaviors of a large group of people, at the same time and same place.” They concluded that differences in culture explain why one company succeeds where another fails within an industry. Consider Apple versus Blackberry, or Target versus Kmart. It wasn’t just the strategy that determined the success of the company, it was the culture. The ultimate summary statement on the topic may have been Peter Drucker’s familiar saying, “Culture eats strategy for lunch.”

However, culture can’t remain stagnant. As the economy and each industry changes, company culture needs to be constantly adapting. Unfortunately, companies often wait too long to adjust their culture. Doing so may mean walking away from a current business model, which can be risky—or it may just be that enacting change is viewed as requiring more effort than it’s worth.

In a survey of executives from 91 companies, with revenue greater than $1 billion, across more than 20 industries, Innosight asked: "What is your organization's biggest obstacle to transform your culture in response to market change and disruption?" Forty percent of survey respondents blamed "day-to-day decisions that essentially pay the bill, but undermine our stated strategy to change." It was by far the most prevalent response. The next most popular answer, at 24%, was "lack of a coherent vision for the future."

What are the options for changing company culture?

Several possibilities exist to change your company culture: hire a new senior executive; embark on a focused campaign, such as increasing innovation; restructure the organization. Into that discussion Jack Welch offered one more possibility, “If you want to change the culture of an organization change the way it develops its leaders.”

It is worth analyzing how changing leadership development could improve company culture. Our research at Zenger Folkman has shown the strong influence leaders have on every measurable business outcome: employee engagement, innovation, intention to stay, productivity, sales, performance, and customer satisfaction. If you use the metaphor of these leaders as the rudder of a large ship moving through the water, Welch’s argument becomes clearer. Even though the leadership team is a relatively small part of an organization, they have enormous influence on its direction and in short, they shape the culture. Reshaping the rudder of the ship has a profound impact on how fast it turns and the stability of its direction.

It is not hard to find critics of company-sponsored leadership development. The cynic argues, “After all the time and money we spend on leadership development, why don’t we have better leaders?” Some argue that leadership development is often detached from corporate strategy. Others say that the methods employed don’t have the power to truly change behavior. Still others observe that there is insufficient follow-through and managerial involvement. Much of this criticism is justified! However, many organizations are working hard to eliminate these barriers to success.

Conversely, there are examples of success. Some organizations see elevated 360-degree feedback scores for their executives over time. Many firms have rising employee engagement scores. Business outcomes, such as customer satisfaction scores, are improving. Such outcomes can be directly tracked back to deliberate leadership development initiatives.