Coaching Someone More Experienced Than You | Achieve Performance

7 Tips For Coaching Someone More Experienced Than You 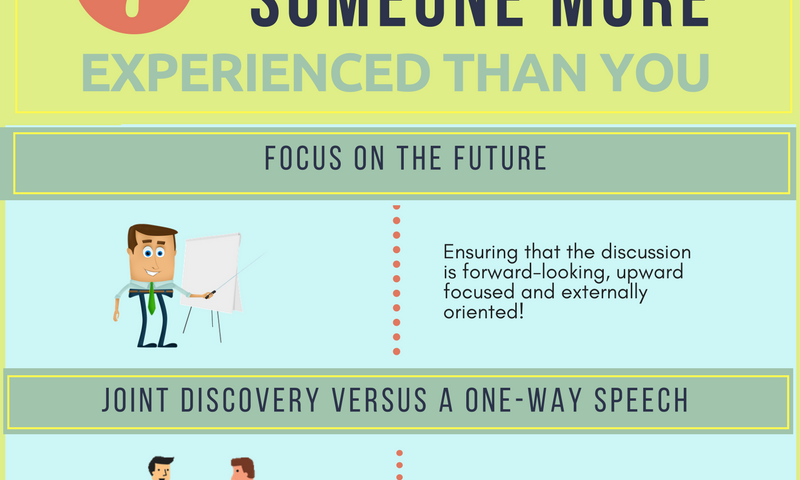 7 Tips For Coaching Someone
More Experienced Than You

Make the conversation forward-looking versus a look in the rearview mirror. The author Edward Everett Hale described his formula for a happy life as:

“Look up and not down;

Look forward and not back;

Look out and not in;

This is a good perspective for a coaching conversation. Ensuring that the discussion is forward-looking, upward focused, externally oriented, and designed to be helpful will ensure its success.

2. Joint discovery versus a one-way speech.

If the coaching process is exploratory and examining the future, there can be no hint of the manager talking down as a high school athletic coach might to a teenage student. It cannot smack of a parent-child relationship. The conversation is ideally completely horizontal; it is a conversation between two peers. One simple measure is the "air time test" which asks what percentage of the time is the manager talking versus the subordinate. Ideally 80% would be the subordinate’s share of the talk time.

The subordinate talking 80% of the time will be totally useless unless the manager is intently listening to what is said. Listening is not simply being quiet while the other person talks; it necessitates focus and is evidenced by facial expression and body language. In a recent Harvard Business Review article I explained that a great listener is “someone you can bounce ideas off of — and rather than absorbing your ideas and energy, they amplify, energize, and clarify your thinking. They make you feel better not merely passively absorbing, but by actively supporting. This lets you gain energy and height, just like someone jumping on a trampoline.”

These are not "gotcha questions" but sincere inquiries that expand the way both parties can think about the subordinate’s future performance. Nothing conveys true listening better than asking insightful questions.

Unless the subordinate is being put on a performance plan for faltering performance, the wise coach carefully avoids saying anything that would be interpreted as criticism. Why? Perceived criticism invariably breeds defensiveness, which in turn leads to performance decline. If the purpose of coaching is to elevate performance and enhance the person's career, criticism is best avoided.

As a manager, you may have observed some behavior that gets in your subordinate’s way or something that could be initiated. It will usually be best received if you say something like, “Fred, I have an observation that I think could be helpful to you. Would you like to hear it? Is now a good time?” We know there’s some pressure for the person to say “Yes,” but this is what you might say if you wanted to give a senior executive some useful feedback. It conveys respect and treats them with dignity.

Coaching conversations can be interpreted as merely casual chatter unless the manager conveys a serious desire to have ongoing discussions to ensure that agreements about future actions are indeed going to be implemented. Scheduling further meetings sends a powerful signal that the manager is genuinely interested in this individual’s career and future performance.

Following these seven tips will go far in making coaching conversations with a highly seasoned colleague be productive and set the stage for many more.

To learn more about the specific research behind these seven tips you can download my white paper, Coaching as a Management Style.