Do You Need to Increase Talent Management Agility? 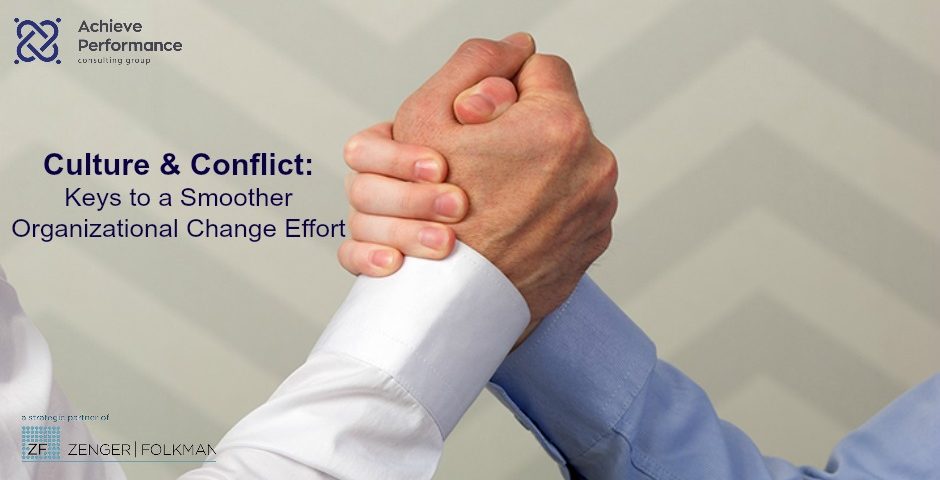 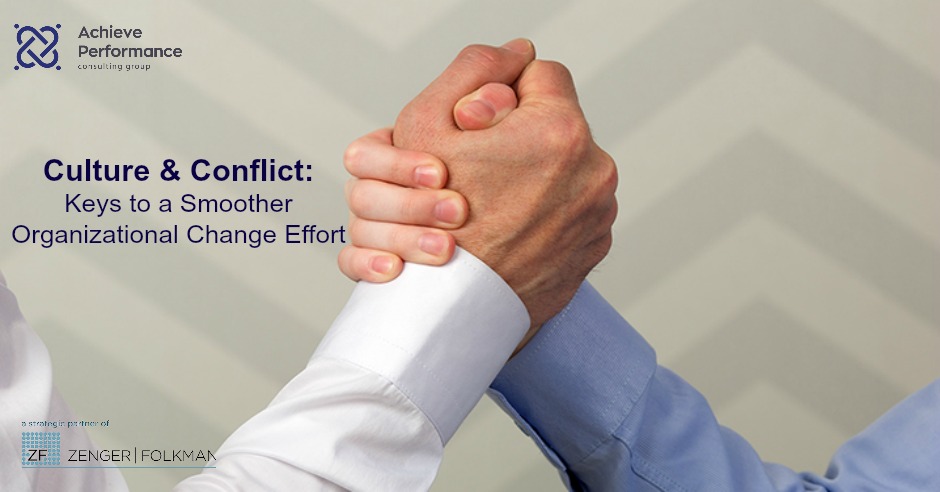 Conflict is an inevitable part of change

Seasoned leaders know that the road to a successful change management process is not always a smooth one. Strategy, structure, tech, resources, and capacity all may be in place and positioned for an effective effort. However, what are often missed are factors that can be crucial to success and that can blindside the unwary leader. In two words: Culture and Conflict.

Conflict is an inevitable part of change
Conflict is a natural aspect of any change process, and well-managed constructive conflict will in fact accelerate and enhance success. In my experience working with clients who are leading a change effort, unmanaged conflict can create a ‘speed bump’ that can slow the process to a near stop—and leave long-term damage in its wake. As we delve into the issues our clients are having, we often discover that the roots of the conflict and the negative, conflict-causing system are found deep in their organizational culture.

Conflict-engagement deficiencies in an organizational culture can become a major roadblock to forward movement. Here are three examples in our line of work:

State and City Police
In the US, a very visible example of a change process in progress is that undertaken by the President’s Task Force on 21st Century Policing, put forward by the President’s administration in 2015 and now being acted upon by the US Department of Justice.1 It has run headlong into a number of systemic conflict issues that are slowing down the change, evidenced by actions seen between a variety of police departments across the country and the communities they serve.
Changing a culture on such a grand scale is an enormous task. And, dealing with the inherent conflicts involved is no simple task. It’s easy to get lost in the issues that surround this change and confuse whether they are cultural or conflict issues, or perhaps something else. Examples include gun control, proper training, excessive use of force, prosecution of officers, oversight issues, racism, profiling techniques, and body cameras, and the list goes on. The 21st Century Policing Final Report does a good job addressing how change can happen, outlines steps to get there, and takes at least some of the confusion out of how conflict can be addressed in the long term. Implementation can’t come fast enough.

Merger & Acquisition
A somewhat simpler example is the recent international merger of two organizations whose leaders didn’t anticipate the conflict dimension of the change they would go through in bringing together the two teams. Eighteen months into the merger—after successfully melding complex products, finance methodology, branding messages, site locations, and a whole business’s worth of other areas—they discovered that they had never developed a solid way to talk about what matters most to them. Conflict had never been normalized, anticipated, and—dare I say—embraced. They found themselves in a situation where they had no normal process in place to discuss difficult issues, and members of the leadership team had come to the point of losing trust in one another. Interpersonal crisis management had become the norm.

Good people were lost. Lots and lots of money was wasted. Called in late to this situation, our work continues here, supporting them in creating a culture that embraces difficult conversations early and is conflict-competent in every way possible.

Organizational culture is often long-standing, entrenched, undocumented, hard to explain and, for those in the middle of it all, difficult to see.

Hyper-growth
What I consider a terrific example of conflict, culture, and change merging in a perfect dance involves an organization we have been working with for about two years. They are a tech company emerging from a small team of about 30 to an anticipated team of about 100 over the next year. The change is in scaling and, in particular, in the management structure changes needed to get to that scale.
This team has in place a number of things we believe will help members thrive through this change: they are aware that they are in a period of change and that their culture is important to them; they measure culture and conflict capacities; they train for, engage in, and use conflict to their advantage; they act early on conflicts headed for negative outcomes; each and every person in the organization has a coach; and they deploy our contract Ombuds services to help everyone see conflict as a normal, positive part of the culture. In this case, the change process is being accelerated, rather than delayed, by conflict. When fully developed conflict engagement is in motion, it is a beautiful thing to be a part of.

Why assess your organizational culture?
Organizational culture is often long-standing, entrenched, undocumented, hard to explain and, for those in the middle of it all, difficult to see. These natural blinders present a challenge to even the most clear-eyed leader. This is when an objective, data-driven assessment is highly useful.

Here’s how an assessment can smooth the way for your change effort:

You gain a visual profile of your operating culture in terms of behavioral norms. These shared expectations have a significant impact on your organization’s ability to solve problems, adapt to change, and perform effectively.


When you see your organization’s values “come to life,” you are better equipped to identify the sources of conflict and pinpoint the barriers to engagement and healthy communication.


You’re put in the driver’s seat to develop strategies for building a high-performance culture, and to benchmark and monitor the changes over time.


You’re not “guessing” anymore. Assessment tools are not simply anecdotal, but rather are rigorously researched and tested. Also key is for these assessments to be analyzed and interpreted by an outside, impartial expert.


Your best assurance of success in your change effort is to head off conflict speed bumps by assessing your organizational culture early on in your process. We use Human Synergistics’ Organizational Culture Inventory® (OCI®), a reliable and validated survey,2 to help our clients understand the nature of their current culture and identify the kind of culture they want to create. Regardless of your choice of assessments, not only will this smooth the way, but it also will help to sustain the outcome you’ve set out to achieve.
As a conflict advisor, there is nothing more gratifying than seeing a client come out on the other side of a change effort with a stronger organizational culture that engages its workforce, welcomes healthy, safe communication and creative conflict, and ignites innovation for continued growth.

Some parting thoughts
Where does conflict fit into your organization’s culture? How comfortable are you working with conflict in your team? What steps can you take to increase your level of comfort?