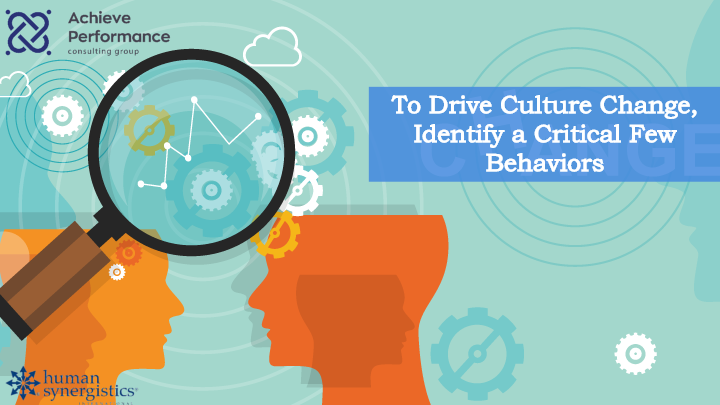 
Focusing on a “critical few” behaviors is one of the fundamental tenets of working effectively with organizational culture. These are patterns of acting that are actionable, highly visible, and measurable. Most important, adopting these behaviors has a meaningful impact on an organization’s strategic and operational objectives. The behaviors are critical because they will have a significant impact on business performance when exhibited by large numbers of people; they are few because people can really only remember and change three to five key behaviors at one time.

Defining and selecting the critical few behaviors is an important first step to addressing business problems through culture, and you can get there by following a four-step process.

Know what you’re trying to accomplish


It’s vital to identify the area or issue in which you are trying to make a difference. For an organization, this often means aligning with the strategic priorities or, sometimes, the goals of a critical enterprise-wide transformation effort. Examples could include reducing injuries in a plant environment, or increasing IT system reliability and resiliency. Defining the ultimate goal will help you to understand what the behaviors should be aimed toward.

Define the behaviors that will contribute to the goals


A behavior is a habitual way of acting that is considered the norm or expectation — it is not a one-time action, a policy change, an outcome, or a mind-set/attitude. To reduce injuries in a plant, a company may focus on maintaining a safe work environment. Declaring a plant “clean-up day” is an example of a one-time action. By contrast, an appropriate habitual behavior could be getting employees to take ownership to maintain the safety of the shop’s workspace, which would include proper waste disposal and the elimination of tripping hazards. You can brainstorm behaviors that will contribute to the goals you’ve defined by asking, “In a future state in which we’ve achieved the goals, what would people actually do (or do differently)?” Then review your brainstormed list to make sure all the behaviors are specific, repeatable, and preferably applicable to everyone in the organization — at all levels and roles.

During a strategy and culture development retreat to review progress and set new improvement plans, a CEO regretfully reflected on how he was asked by their chairman why he was always out of his office and no longer available to take calls. The CEO was feeling guilty about that. He was off giving another vision and values “stump speech” to a group going through a training program. He was getting increasingly frustrated that all those speeches and meetings with hospital staff weren’t allowing him “to get his job done.”

As we talked about culture change, people leadership, and vision and values, he had an “aha.” He came to realize “caring for the context” was his job. Since then, the board has been educated on what the senior team is trying to do and he’s talked to the chairman about how much more frequently he would now be out of his office. The CEO’s redefinition of his role from operational manager to context leader, has been one of the key factors in the strong success of this organization in dealing with change.


A common way to do this is to plot the behaviors using the axes of implementation and impact. 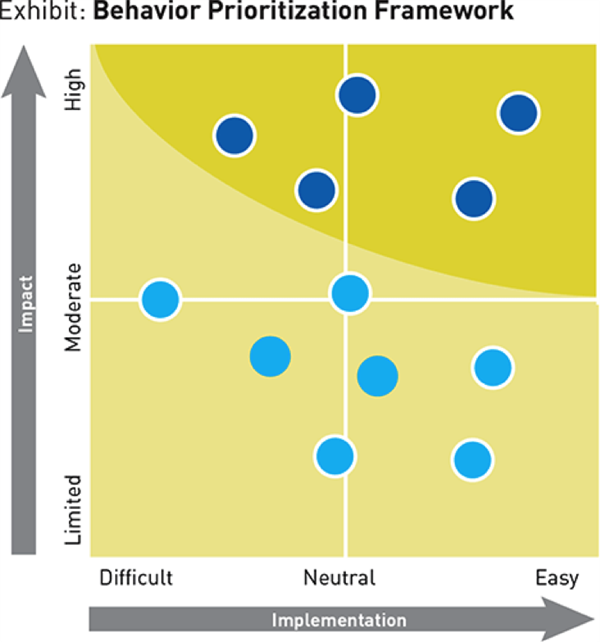 There is only one impact criterion: Will people performing the behavior make a difference in your efforts to achieve your defined goals?

In prioritizing the critical few, impact is exponentially more important than the implementation criteria. Ultimately, the best choices for the critical few behaviors are those that will move the needle furthest on the strategic and operational objectives of your organization.


You might consider using a voting process — it could be an electronic voting tool or something as old-school as a show of hands — to gather formal leaders’ views and prioritize down to the critical few. Then get input from your organization’s “authentic informal leaders” (AILs), those people in your organization who have not been endowed with formal authority yet exhibit the informal leadership strengths that can influence their peers or teams.

When establishing the critical few with AILs, it’s usually best to start by discussing the strategic and operational goals, then presenting a smaller subset of behaviors for AILs’ reactions. The key is to generate input on which behaviors resonate, and share stories of how they would (or already do!) exhibit these behaviors. If AILs are excited about a particular behavior and the impact it could have, it’s a good bet that it is one of the critical few. Armed with this insight, go back to your formal leaders to finalize the plan of action.

Now the journey of driving, reinforcing, and measuring those behaviors throughout the organization can begin. We’ll discuss this topic in more detail in an upcoming blog post. But in a nutshell, as the organization embarks on these efforts, it is important to choose both formal and informal methods to spread the behaviors, and to ensure that formal aspects of the organization (such as performance management, awards, and compensation) are aligned with the critical few behaviors. Leaders should also choose a few key metrics to evaluate the adoption of the behaviors and their impact on strategic and operational goals.

It is possible to drive change — and see tangible progress — through a critical few behaviors even in a complex corporation. And it can be incredibly satisfying to help your organization’s people contribute more tangibly to the strategic and operational goals.