Do Leadership Skills Decrease With Age? 3 Ways To Maintain Your Leadership License 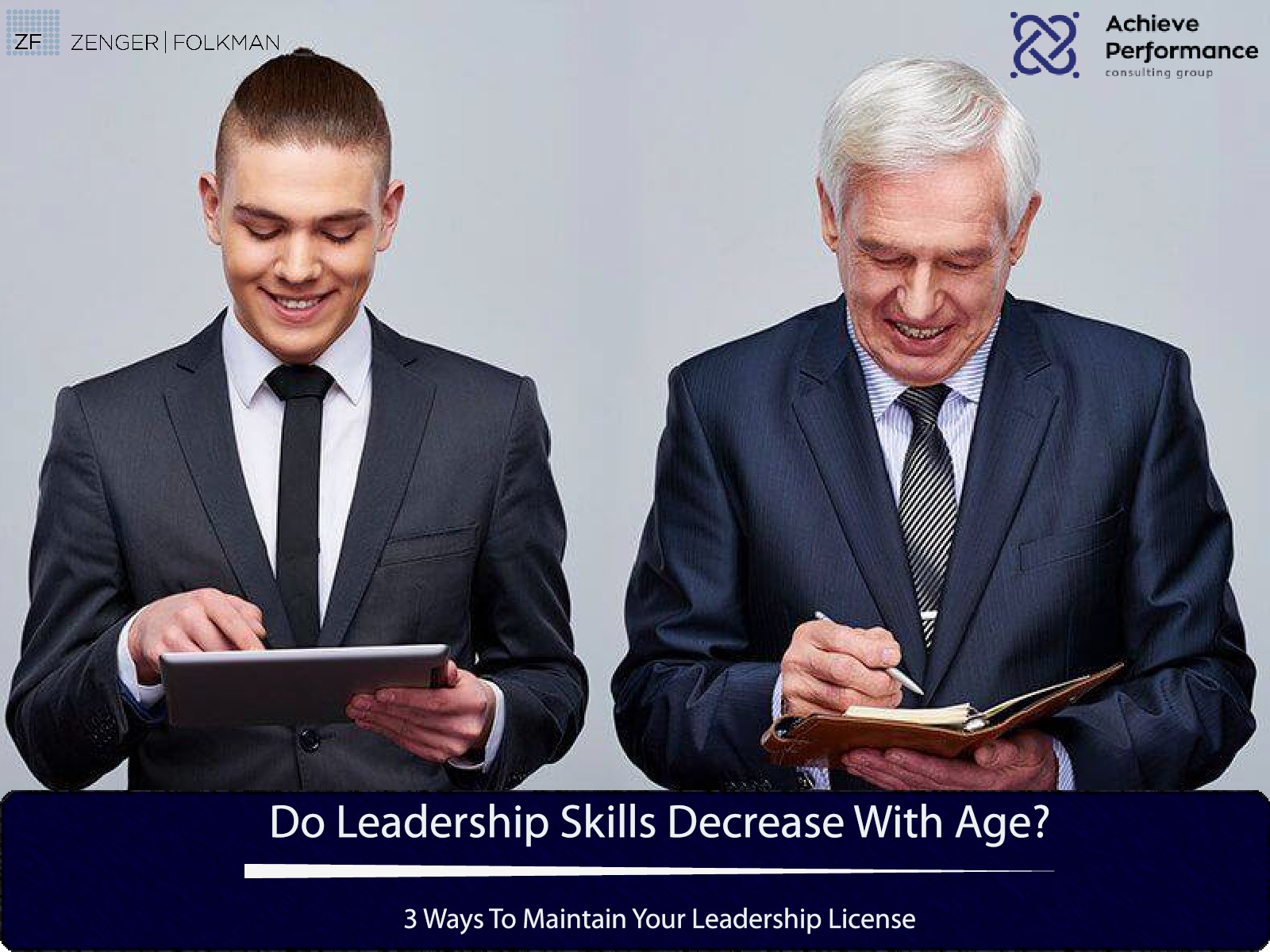 Do Leadership Skills Decrease With Age?

3 Ways To Maintain Your Leadership License


Most professions have a licensing board that is charged with ensuring that people in that profession maintain and improve their skills. This is true for pharmacists, attorneys, engineers, and physicians. What if those in leadership positions in every company or public-sector agency were also required to periodically show that they had taken active steps to maintain and improve their leadership skills?

One of the consistently lowest scores Zenger Folkman has found on our 360-degree feedback instruments is the question having to do with practicing self-development. Most participants will say they aspire to become better leaders. But when asked if they are overtly doing anything to accomplish that, the answer is typically “No.” Less than 10 percent of leaders report that they have any personal development plan on which they are working. For those who have any plan, when faced with any other challenge or demand at work, they acknowledge that their personal development is almost always put behind work demands.

A rising star in a Silicon Valley company was talking to a large group of younger managers. The prime message of his talk was that he had decided early in his work career that every year he would deliberately choose some leadership behavior to improve. On his list were things such as delegation, strategic thinking, rigorous problem-solving, and becoming a better team player. The audience was struck by this individual’s intense motivation for self-improvement. Many we talked with were convinced that this had significantly contributed to his rapid rise in the firm.

Whenever executives are asked about the state of their leadership pipeline, they invariably acknowledge their deep concern. They volunteer that the biggest constraint to their firm’s growth and long-term success is the dearth of strong leaders. Surveys consistently confirm that the number one issue facing CEOs is leadership development.As a result, organizations spend large sums of money to achieve it. It is estimated that US corporations spend roughly $50 billion per year on leadership development.

Whatever game we are playing, most of us like to win – or at least perform respectably in the contest. The same holds true for careers in organizations: it is always more fun when you are succeeding. It is far more satisfying to be a highly respected leader versus one who is experiencing difficulties and receiving criticism from colleagues, bosses, and direct reports.

Do Leaders Generally Improve Over Time?

On their own, do leaders generally get better over time? To find out my colleague Joe Folkman and I analyzed data regarding more than 51,000 leaders. For these leaders, we had 360-degree feedback data consisting of feedback from at least 13 of their colleagues regarding their leadership practices. This feedback came from their boss, several colleagues, and their direct reports.

The 360-degree feedback instruments measured sixteen leadership competencies. By combining those together we created an “overall leadership effectiveness” measure.