Fail Fast and Take the Heat Out of Failure | Achieve Performance 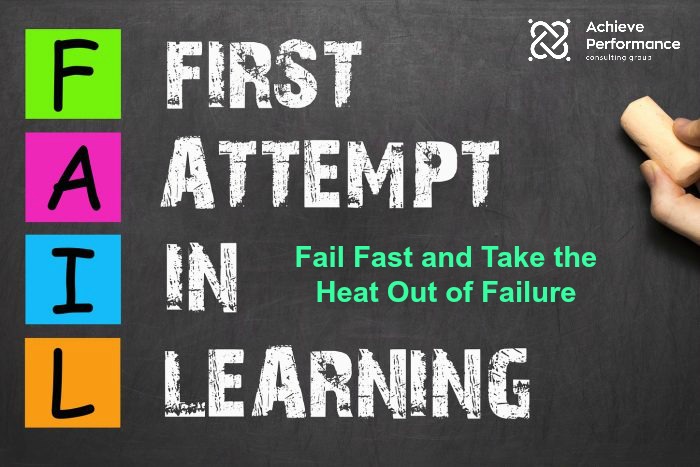 
I recently met with a client responsible for organizational development in the financial services sector who was seeking ideas, information, and input from ImagineNation towards cultivating a “fail fast” organizational culture. It caused me to explore what might be some of the key messages that could be sent to people to create permission, vulnerability, safety, courage, and trust for the deep learnings that mistakes and failure provide in advancing creativity, invention, and innovation.

How could developing a “fail fast” culture help organizations survive, flow, and flourish with high levels of ambiguity, uncertainty, volatility, and instability in the operating environment?

What is “fail fast”?

In software development, the intention is to discover and detect where a potential problem might occur in the overall process to speed it up and minimize time and costs. The focus is on iterating and steering the project to success as it develops rather than creating a lot of software before showing it to the end user – to minimize the risks involved in their acceptance of it. This enables developers to test their products and get immediate customer feedback to ensure that what is being developed is aligned with what customers think they might want or want.


Doing this builds customer intimacy and understanding as to what constitutes value in their eyes because feedback, whether positive or negative, is an important enabler towards adapting and responding quickly and continuously.

Learning from this agile way of working, we can see that it takes the “heat” out of failure as an emotional word. It allows us to potentially reframe failure as feedback. That enables people and organizations to continuously improve behaviors, systems, and processes.

“Scientists operate under the basic and rational principle you get things right by analyzing what went wrong. In his book, Failure: Why Science Is So Successful, Stuart Firestein says,

“Virtually all of science is a failure that is an end in itself. This is because scientific discoveries and facts are provisional. Science is constantly being revised. It may be successful for a time; it may remain successful even after it has been shown to be wrong in some essential way.”


Growing up in western civil societies and school systems, we learn to see failure as a mistake, as some kind of shortcoming or imperfection that we are responsible for and should feel ashamed about. In fact, we live in a world where governments fail, relationships fail, businesses fail. While none of these failures are a cause for celebration, they could be considered as mere signs of ideas in progress.

According to Ed Catmull, president of Pixar and Disney Animation, “Mistakes aren’t a necessary evil. They aren’t evil at all. They are the inevitable consequence of doing something new (and as such, should be valuable; without them, we’d have no originality).”


When we fail, we unconsciously sink into a series of reactive responses that engage us neurologically and emotionally resulting in a range of irrational cognitive (thinking and feeling) distortions, which usually involves disappointment, confusion, and shame. We then move away from and avoid solving the problem because of these pervasive un-resourceful states and act defensively, which may result in laying blame, justification and excuses and even denial.

This is the very opposite of what most scientists are programmed to do, which is to get things right by analyzing what went wrong. This is often a very useful trial and error and iterative process, and according to Catmull, who has failed more times than we can imagine, it’s important: “To disentangle the good and the bad parts of failure, we have to recognize both the pain and the benefit of the resulting growth.”

When we are made to feel “wrong” (by our own internal processing or externally by others), we self-judge and know that others will judge us. This affects us deeply and in effect, we become the failure, fearful of its punitive consequences: being fired, disregarded for promotions and special projects, and may even be required to “fall on our sword.”

When we are willing to take a reflective stance and hit our “pause button” to work with what really goes on when mistakes and failures are involved, we cultivate the self-awareness and ultimately the self-mastery to deal with failure consciously and constructively.

We can then uncouple our own feelings and coach others how to uncouple their fears to help them normalize failure, shifting the way we think and feel about making changes and taking risks.

Failure as learning, exploration, and leadership

As Catmull says in his book, Creativity, Inc.:

If you aren’t experiencing failure, then you are making a far worse mistake: you are being driven by a desire to avoid it. And for leaders, especially, this strategy – trying to avoid failure by outhinking it – dooms you to fail.

If we as leaders can talk about our mistakes and our part in them, then we can make it safe for others. You don’t run from it or pretend it doesn’t exist. This is why I make appoint of being open about our meltdowns inside Pixar because they teach us something important: being open about problems is the first step toward learning from them.

My goal is not to drive out fear completely because fear is inevitable in high stake situations. What I want is to loosen its grip on us. While we don’t want too many failures, we must think of the cost of failure as an investment in the future.”

Leaders who enable and empower people to think, feel, and act in this way will advance change, creativity, invention, and innovation in their organization and advance “fail fast” agile concepts to create a fearless culture.