The Future of Extraordinary Leadership | Podcast 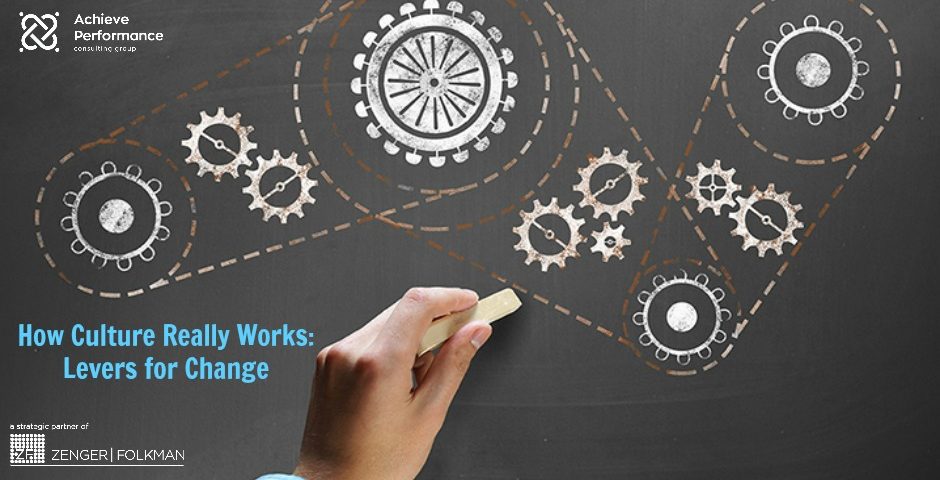 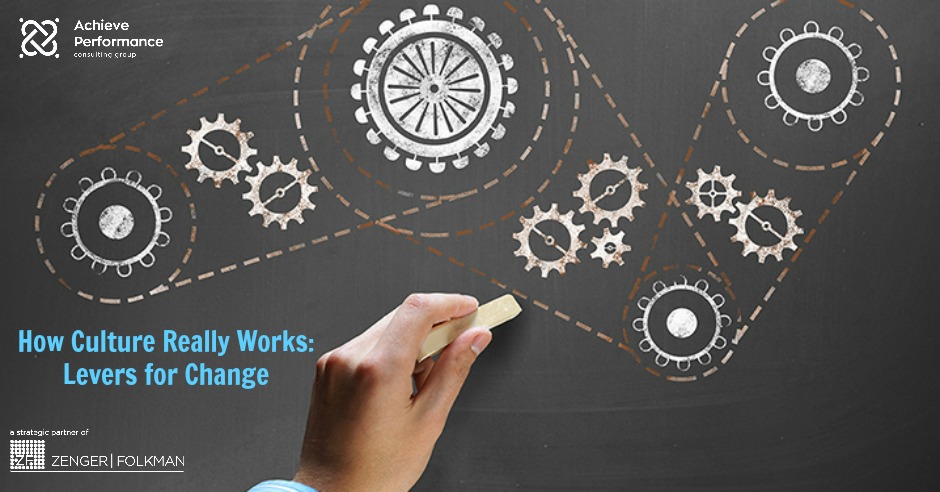 
Given that organization development consultants are fundamentally agents of change, it’s no surprise that many of the questions they ask us about our culture and climate surveys focus on levers for change. Most recently, an attendee at the 1st Annual Ultimate Culture Conference submitted a note card asking, in reference to the Organizational Effectiveness Inventory® (OEI) and my presentation on How Culture Really Works, “If you were to focus on one category of causal factors (structures, systems, etc.), which would you choose?” 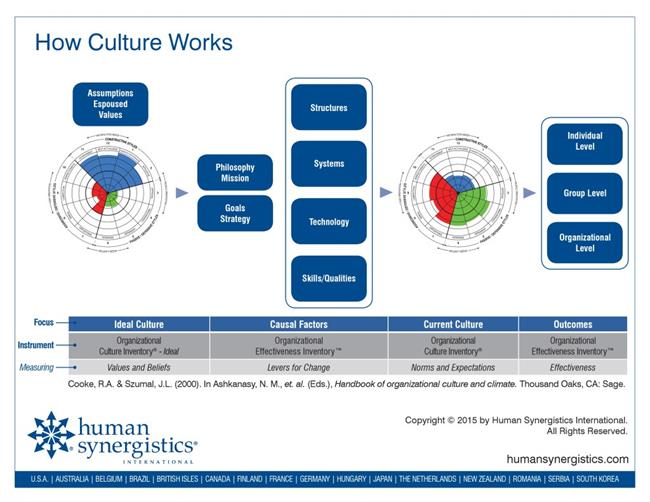 In a survey of executives from 91 companies, with revenue greater than $1 billion, across more than 20 industries, Innosight asked: "What is your organization's biggest obstacle to transform your culture in response to market change and disruption?" Forty percent of survey respondents blamed "day-to-day decisions that essentially pay the bill, but undermine our stated strategy to change." It was by far the most prevalent response. The next most popular answer, at 24%, was "lack of a coherent vision for the future."

After giving considerable thought to that great question, I’ve reverted back to my initial reaction, which is: There really isn’t one category that is most consistently relevant, and therefore my choice would depend on the situation. First and foremost, working from the right side to the left side of the “How Culture Works” model, the most appropriate lever(s) for change would depend on why there’s an interest in changing culture in the first place. “In other words,” as Edgar Schein notes in his recent post on ConstructiveCulture.com, “…before you start messing with culture, what is the ‘business problem’ that worries you and that you are trying to fix?” After identifying the problem or goal, I’d then like to consider the organization’s culture profile and gaps and specify the norms that should be targeted to resolve the problem or make progress toward the goal. And, finally, in discussions with members of the organization, we could identify the category of levers (as well as specific levers) on which to focus using survey data as input.

The levers associated with each of the four categories assessed by the OEI—Systems, Structures, Technology, and Skills/Qualities—were included in the survey as a result of research confirming their relation to the behavioral norms assessed by the Organizational Culture Inventory® (OCI®). As such, consultants and internal change agents could simply focus on those levers along which their organization scored the lowest and be fairly confident about the relevance of their choices. However, they can refine and improve their choices by also considering the way in which the levers are differentially related to the three types of cultures.
We mention some of the levers that are strongly related to Constructive, Passive/Defensive, and Aggressive/Defensive cultures in the OCI Interpretation & Development Guide™. In this post, I’ll focus on selected levers that show interesting, and sometimes different, patterns of relationships to the cultural styles. In discussing some of these observations, my rationale for not choosing one category of levers over the others should become clear.

Thus, while it is generally useful to more regularly reward members for good work and minimize punishment, the challenges of decreasing Aggressive norms may be quite different than those associated with effecting changes in the other styles. Beyond cutting back on criticism, blame, and other punishments, it may be appropriate to decrease or replace certain types of rewards—such as those that lead to inappropriate risk taking, questionable behavior, internal competition, and feelings of punishment on the part of those who performed well but were not singled out as winners. More generally, in planning for change, it should not be assumed that rewards offset punishment; the interaction is more complex with Aggressive norms and warrants special consideration.

Structures—the ways in which people and roles are ordered and connected to create organization—are typically intended to reduce chaos and increase efficiency. While they generally succeed in doing so, the structures that emerge in organizations, particularly with respect to influence, lead to Passive rather than Constructive norms and reduce motivation and performance at the employee level.
The OEI measures structure in a number of different ways, including the distribution of influence and the total amount of influence (the latter reflecting the combined influence exercised by all members at different levels of the organization).1 Increasing employee influence, and therefore reducing the hierarchical distribution of influence, can decrease Passive norms and strengthen Constructive norms. However, our recent analyses confirm that increasing the total amount of influence can have an even greater positive impact on Constructive norms. Total influence can be increased, for example, as employees are given more control over work-related issues (and provided training to do so) and managers use their newly found time to deal with issues around coordination, adaptation, and the like.

Thus, reducing hierarchical control is a legitimate approach to curtailing Passive norms, but increasing the influence of both employees and managers more directly promotes Constructive norms and effectiveness.

When considering technology in the context of culture change, we’ve found that it’s most expedient to focus on socio-technical dimensions and effects—specifically job design. The OEI measures the design of jobs in terms of autonomy, skill variety, feedback, significance, and task identity.2 Though high levels of all five factors send strong cues for Constructive behaviors and run counter to Defensive norms, their effects vary both logically and empirically across the Circumplex styles.

For example, when trying to get the idea of job redesign accepted, it is fairly easy to “sell” the notion that increasing the amount of feedback that people get on how well they’re doing (just by carrying out their jobs) will decrease norms and implicit requirements for Dependent and Conventional behaviors. Similarly, it should be easy to demonstrate that changes designed to highlight the impact that jobs have (on either clients or co-workers) will strengthen norms for Humanistic-Encouraging behaviors. Likewise, increasing the variety of skills required to carry out a job will in turn signal the need for personal growth and professional development (Self-Actualizing norms).

The ways in which the job design factors shape norms are so intuitive that they not only serve as easy-to-sell levers for change, but also as great tools for explaining the “culture disconnect” and the gaps between ideal and current culture profiles. People seem to understand that the immediate demands and requirements of jobs can easily overpower the apparently more positive values delineated in employee handbooks.

The talents, abilities, qualities, and styles exhibited by organizational members are climate factors that can affect performance directly as well as indirectly via their impact on culture. While culture reciprocally shapes the skills and styles of managers down the hierarchy, the impact of the leaders at the top is so powerful that Larry Senn has characterized organizations as “shadows of their leaders.”

Beyond leadership styles and strategies, the communication styles exhibited by members at all levels shape (and are shaped by) culture. Having studied both communication styles and systems theory, I became particularly interested in what we call “communication for learning” and wrote a number of items measuring it for the OEI. These items assess, for example, the extent to which members communicate in terms of the “big picture” and interdependencies or in terms of local issues and silos. The former can serve as levers for strengthening Constructive norms while the latter increase Defensive norms.

Thus, for example, in discussing mistakes, switching the focus from blaming to learning is one of the best levers for decreasing Aggressive/Defensive norms we measure. Doing so also strengthens Constructive norms, as does focusing on team (rather than individual) perspectives and the larger organization (rather than only on units). This suggests that organizations trying to squelch strong norms for Oppositional and Competitive styles develop members’ skills around communication for learning—even if their results along this lever were not among their worst. An investment in building these skills might meet with less resistance than other changes and potentially have a greater impact.

One of the strengths of Human Synergistics’ approach to organizational change is that we provide an integrated array of measurement instruments that is consistent across levels—individual, group, and organizational. This advances change by enabling development at one level to be complemented, facilitated, and reinforced by development at other levels. Similarly, organizations also consist of multiple elements or components, and what goes in one component has implications for the others. In a sense, similar to the earliest models of organizations and change,3 the “How Culture Works” model views culture as a component interconnected with systems, structures, technologies, and skills/qualities as complementary components. Thus, if we are interested in changing culture, we’ll make better progress if we focus on the other components as well rather than just on culture alone or in conjunction with only one of the other components.

Robert A. Cooke, Ph.D. is CEO and Director of Human Synergistics International and Associate Professor Emeritus of Management at the University of Illinois at Chicago. Dr. Cooke specializes in the development and validation of surveys used for individual, group, and organization development. His surveys include the Organizational Culture Inventory®, Organizational Effectiveness Inventory®, Leadership/Impact®, and Group Styles Inventory™, which have been translated into numerous languages and used worldwide for developing leaders, teams, and organizations. He is the author of more than 75 articles, chapters, and technical reports in journals including Psychological Reports and The Journal of Applied Behavioral Science. Cooke received his Ph.D. in Organizational Behavior from the Kellogg School of Management, Northwestern University, where he was a National Defense (Title IV) and Commonwealth Edison Fellow.